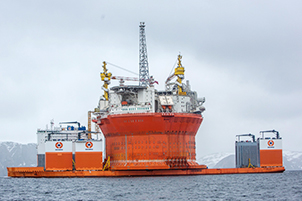 The Goliat platform arrives in Hammerfest today from South Korea after a 63-day voyage covering 15,608 nautical miles. It will now undergo final preparations for the first oil production from the Barents Sea. When the field comes on stream later this summer, Goliat will become the world’s northernmost producing offshore oil field.

The platform has been transported using the Dockwise Vanguard – the world’s largest heavy transport vessel. The voyage has been made across the Indian Ocean, around the southern tip of Africa and then north through the Atlantic west of the British Isles.

The platform is a cylindrical so-called floating, production, storage and offloading (FPSO) facility. In the fjord outside Hammerfest, the deck of the transport vessel will be submerged to a depth of ten metres, enabling the platform to be floated off into the sea. The facility will then float in its own right and five tugboats will take over the work of moving the 170-metre high structure to Ersvika, south-west of Hammerfest.

Hectic activity
Once at Ersvika, work to complete final preparations for production will begin. This will include inspections, tests and checks of all systems and equipment. Work on the platform will be a round-the-clock operation. A total of eleven vessels will take part in the in-fjord work phase, which is expected to take between two and three weeks.

Goliat is planned to come on stream in mid-2015.

Tailored for the Barents Sea
The Goliat FPSO is the world’s largest and most advanced cylindrical oil production platform. It is specially designed and constructed to adapt to the long winter nights and icing hazards typical of the Barents Sea. The platform is fully winterised and designed to withstand 100-year Barents Sea storm conditions. Innovative technologies have been developed in a number of areas, not only to reduce the risks to personnel and the environment, but also to enable the platform to deal with any emergency response situations.

Operated from Hammerfest
Once in production, the Goliat platform will be manned by about 40 people. The field will be operated from Hammerfest, where Eni Norge has established a 60-strong operations organisation. It has been important for Eni Norge to generate industrial spin-offs in northern Norway. This has been achieved by requiring suppliers to establish a local presence and offices in Hammerfest. The result is that as many as 50 companies with bases in Hammerfest have been involved in the supply of goods and services to the Goliat project.

The world’s largest and northernmost

The Goliat platform is the world’s largest and most advanced cylindrical floating, production, storage and offloading (FPSO) facility.

It has been designed by the Norwegian company Sevan Marine and built at the Hyundai shipyard in South Korea.

The platform has a production capacity of 100,000 barrels of oil per day and a storage capacity of one million barrels.

The platform weighs 64,000 tonnes (dead weight) and is 107 metres in diameter and 170 metres high, including its flare tower. The height from its base to the helideck is 75 metres.

The estimated recoverable reserves in the field are 178 million barrels of oil equivalents.

The lifetime of the field is currently estimated at 15 years.

Three specially designed tankers have been built to transport oil from the Goliat field. One tanker will call at the platform every week.