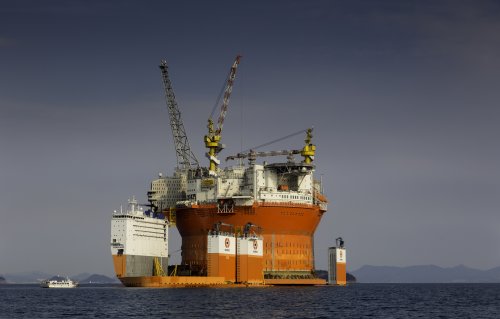 Goliat will be the first oil field to come on stream in the Barents Sea, and is the world’s most northerly offshore development.

The Goliat platform started in February 2015 its voyage from South Korea to Norway on board the Dockwise Vanguard, the world’s largest heavy lift vessel. The Goliat project is now entering the final stage of its development phase prior to coming on stream.

Goliat will be the first oil field to come on stream in the Barents Sea, and is the world’s most northerly offshore development.  The platform is operated by Eni Norge and is the largest and most sophisticated cylindrical Floating, Production, Storage and Offloading (FPSO) facility ever built.

Arrival in April – on stream this summer
The journey to Hammerfest in Finnmark, northern Norway, will take about 60 days, with expected arrival by early April. The FPSO will then be prepared for operations and towed the 80 kilometres to the field location for hook-up and commissioning. It will be held on location by 14 anchor lines and hooked-up to a subsea production system comprising a total of 22 wells drilled from 8 templates.

The Goliat development concept has been designed with the harsh Barents Sea weather conditions in mind and includes several engineering innovations.

Ripple effects in northern Norway
The Goliat project is one of Eni’s most important field production start-ups in 2015, and represents an important milestone both for Eni Norge and the development of the oil and gas sector in the Barents Sea.

In its role as operator of the field, Eni Norge aims to generate ripple effects in northern Norway in the form of industrial development, company start-ups, as well as skills and expertise development.  In order to get local businesses involved, the company has organized operations and maintenance contract packages into a series of small supply and service agreements. This has resulted in a considerable expansion of the local industrial base. Major players in the oil services supply chain have established themselves in Hammerfest and are now ready to begin the work set out in their contracts.

A considerable increase in activity is expected in and around Hammerfest during the period between arrival of the platform and production start-up.

Job creation
Eni Norge has established its own operations organisation in Hammerfest consisting of about 60 persons. An additional 120 to 140 personnel will be working on the Goliat platform. Moreover, crews for several supply and stand by vessels and a multitude of suppliers with bases in Hammerfest is creating additional long term employment. Annual operations and maintenance contracts for the field are estimated to be worth ca NOK 1.5 billion, and will guarantee job security for many years to come.

In recent years, an extensive infrastructure has been built-up in connection with the Goliat project, including office facilities, housing, logistics functions and upgrades to the municipality’s power distribution grid.

To date, Norwegian suppliers have been awarded contracts worth tens of billions of NOK in relation to the Goliat project.

About Goliat
The Goliat FPSO is designed by the Norwegian company Sevan Marine, and built at the Hyundai Heavy Industry yard in South Korea. The platform has a production capacity of 100,000 bopd per day, and storage capacity amounting to a million barrels of oil. It weighs 64,000 tonnes, is 107 metres in diameter, 75 metres tall and is designed to withstand in the harsh conditions of the Barents Sea.  The estimated recoverable reserves from the field are 178 million boe. The lifetime of the field is currently estimated to be 15 years.

About Eni Norge
Eni Norge is celebrating 50 years on the Norwegian shelf. The company is part of Eni SpA, an Italian integrated energy company with operations in more than 85 countries.