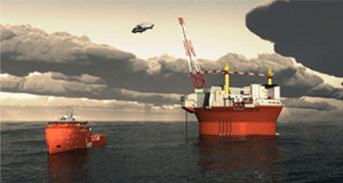 Eni Norge awards contract to Mento AS in Hammerfest

Eni Norge is entering into an agreement with Mento AS for the provision of services for the Goliat project. The Hammerfest company shall, among other things, provide service and maintenance of hoses and hose systems on the Goliat platform.

The agreement is valid for three years, and contains an option for up to two extensions, each of two years, a total term of seven years. Among other things, Mento shall be responsible for the purchase, storage, testing and certification of hoses and associated equipment.

Mento’s location in Hammerfest contributes to fulfilling Eni Norge’s goal that the Goliat project shall have as many local and regional ripple effects as possible in Finnmark County.

About Goliat
Goliat was discovered in the year 2000, and will be the first oil field to come into production in the Barents Sea. The field will be developed using a floating production, storage and offloading (FPSO) platform, specially adapted to conditions in the Barents Sea. In all, the Goliat field contains approximately 174 million barrels of oil and 8 billion standard cubic metres of gas. Production is planned to commence in the second half of 2015. Eni Norge is the operator of the field, with an ownership interest of 65 per cent. Partner Statoil owns the remaining 35 per cent.

About Mento
Mento was founded in Stavanger in 1971 and also has divisions in Bergen, Kristiansund and Hammerfest. The company supplies products and services connected with hoses, filters, valves and drilling-related equipment.